I return from hibernation!

Wow! I can't believe it's been over a year and a half since I last wrote here. I didn't think it had been that long.

Where to start? I'm single. I got another cat. No the two aren't related. 😂 The youngest girl is named Celeste. She chose me and is the most loving cat I've ever known. Not that my older cats aren't loving, but I've never met a cat like her where she is so attached to me. 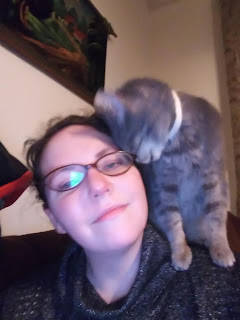 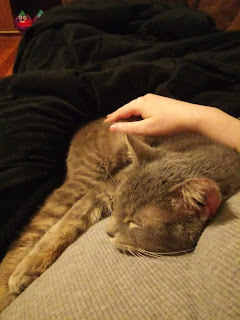 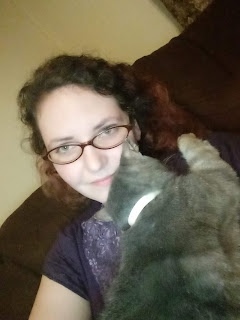 The middle one she's sleeping on top of me. She's a sweetheart.

So, to catch everyone up, Lisa and I are no longer friends. She basically stole Scott from me and complained about her not getting enough attention.

She left her husband for Scott, claiming it was mostly me. They moved out in March of last year.

Friendships were tried to be rekindled from Sept to up until a few days ago. Not even her son, monster man, is enough for me to try again or put up with the bs.

I'm just done with them.

Oh! Some good news! In October of 2018, Chris called me! We talked for hours. And continue to talk for hours at times. Our friendship is really good. He's even coming out to visit some time. Just as a friend.

After all of the pain and bad relationships, I'm okay with being single for the next ten years. Maybe then I'll consider dating.

I dated all of my 20's and teen years. I'm 30 now and I'm excited for the years ahead of me. Finding my own place in the world. My own happiness. Not being tied down to people and obligations.

My twin got engaged last October!! She lives in our home state. I went out to visit her. They live together with his kids. There was a BBQ planned so she didn't question my staying a few days.

Even when everyone was waiting and decorations were out and their favorite movie was playing, she didn't get what was going on. It was so sweet. I told her maybe she should walk forward. Then she understood!

She said yes yes yes before he even finished asking. Then proceeded to say fuck you over and over bc it was public. And he told her for years that he wouldn't get married again. Except her fiancé and I were planning for months. He was planning longer!!

My other friend from home state: her, twin and I are the three musketeers. She's in the process of buying a house. Waiting on legal to look it over.

I'm so excited to help my friends celebrate their big milestones of life. Have time for them to celebrate with them.

I've honestly never been this happy in my life. It's great and scary and surreal.

I have a new journey to share and a lot more to update y'all on! I'm looking forward to writing again and reading other bloggers.

P.S. There will be kink stuff on the blog again. I'll explain next time! 😉
Posted by JustAnotherSub at 12:03 AM No comments:

I had no idea that three days after my last post how much things would change. It's been a hectic two months since then. I'm no longer dating Frank. It had nothing directly to do with the new guy, Scott.

I finally talked about my frustrations, especially over the last year of that relationship, and I realized how miserable I was. How I put so much energy into a relationship when I wasn't getting nearly the same in return.

Since then, I've been doing much better. Lisa and I are fantastic again. We're going on a 24 hour vacation to the beach. I'm happy to be going home (ish) and she's happy for the ocean.

Besides being incredibly happier on a daily basis, I've been focusing on my health through eating habits and little changes. In two months I've lost 12 combined inches from my hips to bust! I haven't lost a single pound yet. Go figure. I'll get there though. I can definitely tell I'm building muscle and losing fat so that's likely why. It's just really exciting. :)

Oddly enough, I also have more of a butt than ever before. I'm fairly certain it has to do with the copious amounts of sex. Kink has made a return to my life so I'll have fun things to write about again, not simply all the boring life stuff.
Posted by JustAnotherSub at 12:20 AM No comments:

I apologize for the unintended hiatus. I needed space to breathe, think, and sort things out.

I was fighting with new insurance about getting meds covered. Trying to replace half my doctors. Dealing with the fall out of my inner circle of friends. Lisa's husband making me contemplate murder for the first time in a while. He can have a heart attack any day and pass away, for all I care. I know that sounds callous but he's making my girlfriend miserable. Treating her like shit.

Frank hasn't been any better over the last five to six months. I'm done. I deserve better. I have better in Lisa and the guy I mentioned last time. I never thought anyone could make me so happy, be so supportive. I didn't know what I needed until we found each other, hiding in plain sight.

Friday everything changes. I'm ending things with Frank. It wasn't an easy or quick decision. Honestly it's been building to this for some time.

Stupid ex husband used me. I won't be used again. I learned my lesson.

I've also been silent bc I knew Steve was getting married. Last Friday in fact. And it mattered until suddenly it didn't. Funny how that works. I wish them all the best, I guess, considering she doesn't like me lol.

I have a bright future to look forward to and that's in the past.
Posted by JustAnotherSub at 2:34 AM No comments:

JustAnotherSub
Been mainly in lifestyle for over 8 years. I identify as submissive and a masochist. This is my ongoing journey.